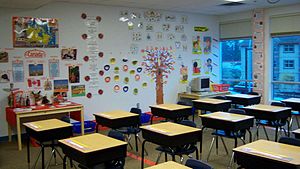 The charge made by a report from the Council on Foreign Relations (CFR) that the country’s students score poorly despite U.S. schools spending more than schools in other countries surprised no one. What was surprising was their plan to improve education: Leave things alone.

The report, put out by the CFR’s U.S. Education Reform and National Security task force, outlines clearly the deficits, deficiencies, and shortfalls of what passes for education in this country:

Educational failure puts the United States’ future economic prosperity, global position, and physical safety at risk. The country will not be able to keep pace—much less lead—globally unless it moves to fix the problems it has allowed to fester for too long.

The task force recited the results of the 2009 Program for International Student Assessment (PISA) which measured the performance of 15-year-olds in math, science, and reading. Where once the United States was at the top of the 34-nation OECD (Organization for Economic Cooperation and Development), U.S. students now rank 14th in reading skills, 17th in science, and a dismal 25th in math. It detailed the failure of education in the United States:

The report said this bodes poorly for the country in five areas: economic growth, physical safety, intellectual property, global awareness, and unity. It added, “Too many young people are not employable in an increasingly high-skilled and global economy, and too many are not qualified to join the military because they are physically unfit, have criminal records, or have an inadequate level of education.”

Its recommendations were simplistic, general, and unlikely to make any difference. First, states should expand the Common Core State Standards (another measure of student performance) to ensure “that students are mastering the skills and knowledge necessary.” Second, “make structural changes to provide students with good choices,” and thirdly, “launch a national security readiness audit” and then publicize the results.

That’s it. Measure students’ performance to confirm their poor performance, make some cosmetic changes, and publicize the results.

The report concludes: “The Task Force concludes that its message and recommendations can reshape education in the United States and put this country back on track.”

This lack of concrete provably effective solutions to the nation’s educational disaster shouldn’t surprise anyone. Joel Klein co-authored the study along with Condoleezza Rice, former U.S. Secretary of State. Klein is an insider, a graduate of Columbia University and Harvard Law, with experience in the Clinton administration as the lead prosecutor in the government’s antitrust case against Microsoft. But his main claim to fame is that he headed New York City’s public schools from 2002 to 2011.

He failed to make a dent in that system’s problems. Last June the New York State Education Department released data showing that only 37 percent of students who entered high school in 2006 left four years later “adequately prepared for college.” In New York City, Klein’s bailiwick, “21 percent of the students who started high school in 2006 graduated last year with high enough scores on state math and English tests to be deemed ready for higher education or well-paying careers.”

Surprisingly, Klein admits that he failed to make any improvement whatsoever. Six months after leaving his post he wrote “The Failure of American Schools,” wherein he explained what he was up against: the teachers’ unions. He told this story:

To comprehend the depth of the problem, consider one episode that still shocks me. Starting in 2006, under federal law, the State of New York was required to test students in grades three through eight annually in math and English. The results of those tests would enable us, for the first time, to analyze year-to-year student progress and tie it to individual teacher performance—a metric known in the field as “teacher value-added.”

In essence, you hold constant other factors—where the students start from the prior year, demographics, class size, teacher length of service, and so on—and, based on test results, seek to isolate the individual teacher’s contribution to a student’s progress. Some teachers, for example, move their class forward on average a quarter-year more than expected; others, a quarter-year less….

After we developed data from this metric, we decided to factor them into the granting of tenure, an award that is made after three years and that provides virtual lifetime job security….

The United Federation of Teachers objected. I proposed [some changes to address the union’s concerns]. Even with these limitations, the UFT said “No way,” and headed to Albany to set up a legislative roadblock…

As a result, even when making a lifetime tenure commitment, under New York law you could not consider a teacher’s impact on student learning. That Kafkaesque outcome demonstrates precisely the way the system is run: for the adults. The school system doesn’t want to change, because it serves the needs of the adult stakeholders quite well, both politically and financially. [Emphasis added.]

There it is in black and white: The unions exist for the benefit of the unions, not for the benefit of the students. Klein never mentions unions in his CFR study. Nor does he mention another way out of the morass: home schooling. The real issue in education, then, is not how well-prepared students may be but that the government and unions stay in control. Until that chokehold is broken, nothing will change.

Antitrust Council on Foreign Relations Education Military Spending Unions
This entry was posted on Saturday, April 7th, 2012 at 6:59 am and is filed under Politics. You can follow any responses to this entry through the RSS 2.0 feed. Both comments and pings are currently closed.
Many of the articles on Light from the Right first appeared on either The New American or the McAlvany Intelligence Advisor.