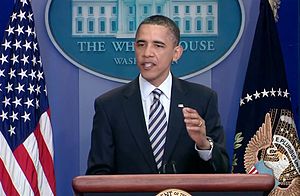 Reaching into President Obama’s 14-page, 7,200 word luncheon speech to the Associated Press on Tuesday, some conservative observers took umbrage at a few of his choicest and more outrageous characterizations of Rep. Paul Ryan’s budget bill, while leaving much behind.

Patrick Knudsen, writing on the Heritage Foundation’s blog, said the President used “shrill hyperbole” when he called Ryan’s plan “thinly veiled social Darwinism” which would, if enacted, be “antithetical to our entire history as a land of opportunity.” It would “impose a radical vision on our country” and would be a “prescription for decline.” Taking another approach, Alison Fraser also wrote on Heritage’s blog that the reason the President directed so much attention to Ryan’s plan was because he wanted to direct people’s attention away from his own failures as President over the past three years: “As a counter to his failure to lead us away from the fiscal abyss, Obama has chosen to attack Ryan and the House budget with scary rhetoric about Trojan horses, social Darwinism, and [its] radical vision for the country.”

House Speaker John Boehner (R-Ohio) responded to Obama’s comments by doubting his sincerity and chastising him for not presenting a reasonable budget alternative:

If the president were serious, he would put forward a plan to deal with our debt crisis and save Social Security, Medicare and Medicaid for future generations of seniors without raising taxes on small businesses that are struggling in this economy. Instead, he has chosen to campaign rather than govern, and the debt crisis he is presiding over is only getting worse.

Rep. Jeb Hensarling was even stronger, calling Obama’s speech an “unhinged attack” and an “act of desperation” to direct attention away from his failed policies. Even Darrell West of the Brookings Institution, a left-of-center think tank, agreed: Obama needs to direct attention to his opponents in the upcoming election (Republican presidential candidate Mitt Romney supports Ryan’s budget bill) and away from his own record. Said West, “If [the election] is a referendum on him, he loses.”

A careful reading of the entire transcript of his speech, however, confirms what is already known about the President: He is a master of masquerade and rhetorical misdirection. He knows what the problem is that faces the country. In his best Reaganesque imitation, he opined:

Whoever he may be, the next President will inherit an economy that is recovering, but not yet recovered, from the worst economic calamity since the Great Depression. Too many Americans will still be looking for a job that pays enough to cover their bills or their mortgage. Too many citizens will still lack the sort of financial security that started slipping away years before this recession hit. A debt that has grown over the last decade, primarily as a result of two wars, two massive tax cuts, and an unprecedented financial crisis, will have to be paid down….

What…can we do to restore a sense of security for people who are willing to work hard and act responsibly in this country?

Keep in mind, I have never been somebody who believes that government can or should try to solve every problem….

As President, I’ve eliminated dozens of programs that weren’t working, and announced over 500 regulatory reforms that will save businesses and taxpayers billions, and put annual domestic spending on a path to become the smallest share of the economy since Dwight Eisenhower held this office….

So I believe deeply that the free market is the greatest force for economic progress in human history.

And then, leaving unanswered any potential challenge to those questionable claims of cost cutting and deregulatory efforts, the President shifted gears, taking the balance of his speech to promote the fundamental principles of his progressive ideology to an open and supportive audience:

That belief is also why we’ve sought to ensure that every citizen can count on some basic measure of security. We do this because we recognize that no matter how responsibly we live our lives, any one of us, at any moment, might face hard times, might face bad luck, might face a crippling illness or a layoff. And so we contribute to programs like Medicare and Social Security, which guarantee health care and a source of income after a lifetime of hard work. We provide unemployment insurance, which protects us against unexpected job loss and facilitates the labor mobility that makes our economy so dynamic. We provide for Medicaid, which makes sure that millions of seniors in nursing homes and children with disabilities are getting the care that they need.

He avoids the fact that “we” refers to the taxpayers who pay the bills for these programs and not the government, which has no money of its own except that which it extracts by force from those taxpayers. But he reassures his audience that this isn’t some “wealth redistribution” scheme but instead just what is needed to be done as good citizens:

What leaders in both parties have traditionally understood is that these investments aren’t part of some scheme to redistribute wealth from one group to another. They are expressions of the fact that we are one nation….

It doesn’t make us weaker when we guarantee basic security for the elderly or the sick or those who are actively looking for work. What makes us weaker is when fewer and fewer people can afford to buy the goods and services our businesses sell, or when entrepreneurs don’t have the financial security to take a chance and start a new business.

Warming up to the favorable response to all of this shared ideology from his progressive ideologues in the press, the President then indulged in typical class warfare, pitting the wealthy against the poor struggling middle class, like his grandfather:

In this country, broad-based prosperity has never trickled down from the success of a wealthy few. It has always come from the success of a strong and growing middle class. That’s how a generation who went to college on the G.I. Bill, including my grandfather, helped build the most prosperous economy the world has ever known. That’s why a CEO like Henry Ford made it his mission to pay his workers enough so they could buy the cars that they made. That’s why research has shown that countries with less inequality tend to have stronger and steadier economic growth over the long run.

Undeterred by any reliance on facts or historical accuracy, the President then pressed forward with his plan to tax the wealthy, claiming that the government can always do better with funds extorted from its rightful owner than the owner himself:

These proposed tax breaks [offered in Ryan’s bill] would come on top of more than a trillion dollars in tax giveaways for people making more than $250,000 a year. That’s an average of at least $150,000 for every millionaire in this country—$150,000.

Let’s just step back for a second and look at what $150,000 pays for:  A year’s worth of prescription drug coverage for a senior citizen. Plus a new school computer lab. Plus a year of medical care for a returning veteran. Plus a medical research grant for a chronic disease. Plus a year’s salary for a firefighter or police officer. Plus a tax credit to make a year of college more affordable. Plus a year’s worth of financial aid.  One hundred fifty thousand dollars could pay for all of these things combined—investments in education and research that are essential to economic growth that benefits all of us.

The President’s speech was a lot more than just a partisan attack on his potential opponent’s support of a budget. It was the opening of his reelection campaign, laying out as clearly and succinctly and persuasively as he could, the differences between his vision—the hard-core socialist progressive vision—and of the establishment Republican Party’s softer, gentler, kinder, less invasive progressivism. Presidential candidate Ron Paul summarized the effect and breadth of the Ryan budget:

I sympathize with my friend Rep. Paul Ryan’s aim in reducing federal debt, reforming entitlements while protecting those who currently depend on them, and reducing taxes. Unfortunately, Mr. Ryan’s budget assumes that the federal government can and should continue all its current activates, the welfare state just needs to be run in a more efficient manner.

2012 Elections Conservative Economy Education Eisenhower Elite Entitlements Establishment Federal Government Free Market Health Care Heritage Foundation John Boehner Medicaid Medicare Mitt Romney Obama Paul Ryan Recession Republican Ron Paul Small Business Social Security Spending Taxes Unemployment Unions
This entry was posted on Thursday, April 5th, 2012 at 11:27 am and is filed under Economics, Politics. You can follow any responses to this entry through the RSS 2.0 feed. Both comments and pings are currently closed.
Many of the articles on Light from the Right first appeared on either The New American or the McAlvany Intelligence Advisor.