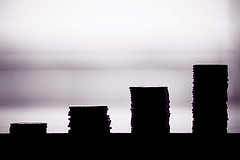 When Federal Reserve Chairman Ben Bernanke donned his professorial cap and addressed 30 undergraduate students at George Washington University on Tuesday, he claimed it was all in the interest of transparency. According to the New York Times, “The Fed is concerned that it is neither loved nor understood by many Americans, and that public anger could lead to constraints on its powers.”

A close look at his actual presentation, augmented by slides, confirms his attempt to direct the students’ attention away from the Fed’s obvious dangers, faults, and failures and instead concentrate on its alleged virtues.

For example, his attack on the gold standard was filled with falsehoods and half-truths that failed to convince, only to confuse:

What the professor fails to state is that there is the gold standard and there is a paper standard that can only be enforced when a central bank is given a monopoly over what citizens may use as money. He fails to make clear that it’s the quantity of gold that “sets the money supply” and from that is derived the value of each piece, which is reflected in its purchasing power in the marketplace. It’s the citizen, freely accepting, using and exchanging gold for goods and services in the marketplace, who sets the price level. Buried in the comment “with limited central bank intervention” is the core of the problem: Bernanke doesn’t want people making those choices and decisions for themselves. Those decisions must be left to experts like himself to tell the citizens what is allowed to be used as money and what is not. It’s that beautiful limitation that the gold standard places on banks that Bernanke doesn’t like.

Problems with the gold standard: The strength of the gold standard is its greatest weakness too: Because the money supply is determined by the supply of gold, it cannot be adjusted in response to changing economic conditions.

Here in full flower is the consummate arrogance of a central banker: “Because the money supply is determined by the supply of gold” and not by experts gathered around a mahogany table in a building in downtown Manhattan, it is therefore a bad thing. He admits that the supply of money “cannot be adjusted in response to changing economic conditions,” which is of course another expression of the necessity of a banker to do the adjusting. Of course, the free market adjusts the supply of everything when it is left alone to do so, even the monetary unit itself. That’s why, when the country was enjoying its greatest and grandest economic explosion in the late 19th century the country was on (or, to be fair, close to) the gold standard, the price level declined, reflecting that explosion and resulting in a rapidly rising standard of living because each piece of money bought more. Put another way, savers were rewarded knowing that their savings would purchase more goods and services in the future. Banks were simply another piece of the economy, providing banking and loan services for a fee and protection for savers with their vaults.

One more of his slides will be enough to make the point that the good professor was unsuccessfully trying to cover up the failures of the Fed:

Problems with the gold standard:

Although the gold standard promoted price stability over the very long run, over the medium run it sometimes caused periods of inflation and deflation.

Really, the professor should know better. Booms and busts under the gold standard were largely and predictably the result of banks and bankers lending beyond their deposits through fractional-reserve mechanisms. When depositors wanted their gold back, the banks were unable to honor those requests. The money supply shrank, the banks went bust, and the depositors learned valuable lessons.

Over the long run, since the beginning of the republic until approximately 1910, the price level remained constant. Put another way, a piece of gold money retained its purchasing power for nearly 150 years without a central bank. But once central banks got involved, the stability vanished. And when the last vestige of the gold exchange system disappeared in 1971, the inflation inherent in a paper standard exploded. One dollar today is worth only 18 cents in 1971 money. A dime is worth two cents. A nickel is worth a penny. A penny—is essentially worthless. All thanks to the Fed.

Why didn’t the good professor, in the interest of transparency, tell the truth, the whole truth?

The Fed is a cartel, created in secret, to protect banks against their own foolish behaviors.

Why didn’t the professor tell the truth—the dirty little secret that former Fed chairman Alan Greenspan exposed in his article “Gold and Economic Freedom” published in Capitalism: The Unknown Ideal? Here’s what Greenspan had to say:

This is the shabby secret of the welfare statists’ tirades against gold. Deficit spending is simply a scheme for the “hidden” confiscation of wealth

Gold stands in the way of this insidious process. It stands as a protector of property rights

If one grasps this, one has no difficulty in understanding the statists’ antagonism toward the gold standard.

The comforting things, the reassuring things, the exciting things about professor Bernanke’s attempts at transparency are first, that he thinks they are needed as the public’s awareness of the Fed’s faults and failings are becoming ever more obvious, and second, that the more he rails against the gold standard and the free market, the more he exposes those faults and failings of the Fed for all to see. The battle between freedom and statism is unfolding right before his students’ eyes. May they have the eyes to see.

Alan Greenspan Banking Ben Bernanke Central Bank Deficit Federal Reserve Fiat Currency Free Market Freedom Gold Standard Great Depression Inflation Money Supply Monopoly Paper Money Spending Statism
This entry was posted on Wednesday, March 28th, 2012 at 1:00 am and is filed under Economics, History, Politics. You can follow any responses to this entry through the RSS 2.0 feed. You can leave a response, or trackback from your own site.
Many of the articles on Light from the Right first appeared on either The New American or the McAlvany Intelligence Advisor.