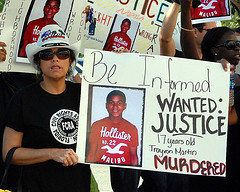 The shooting of Florida teen Trayvon Martin has drawn national attention to the incident with many commentators already drawing conclusions about guilt and innocence in the matter. New information and evidence in the case continues to feed the controversy.

According to CBS News, Martin had been suspended from school three separate times for offenses ranging from tardiness and truancy to vandalism. In fact, he was on a 10-day suspension from school at the time he was shot by George Zimmerman, captain of the local Neighborhood Watch team. Preliminary evidence indicates that Martin had violated his school’s zero tolerance drug rules.

New information about exactly what happened that evening was released by law enforcement officials to the Orlando Sentinel, which published the following late Monday evening:

On Feb. 26, when Zimmerman first spotted Trayvon, he called police and reported a suspicious person, describing Trayvon as black, acting strangely and perhaps on drugs.

Zimmerman got out of his SUV to follow Trayvon on foot. When a dispatch employee asked Zimmerman if he was following the 17-year-old, Zimmerman said yes. The dispatcher told Zimmerman he did not need to do that.

There is about a one-minute gap during which police say they’re not sure what happened.

Zimmerman told them he lost sight of Trayvon and was walking back to his SUV when Trayvon approached him from the left rear, and they exchanged words.

Trayvon asked Zimmerman if he had a problem. Zimmerman said no and reached for his cell phone, he told police. Trayvon then said, “Well, you do now” or something similar and punched Zimmerman in the nose, according to the account he gave police.

Zimmerman fell to the ground and Trayvon got on top of him and began slamming his head into the sidewalk, he told police.

It turns out that there were six witnesses to the scene, one of whom gave an eye-witness account that corroborates the details provided by the police. Concerned for his personal safety, the witness who called himself John gave an off-camera interview with TV station FOX 35 in Orlando:

The guy on the bottom who I believe had a red sweater on was yelling to me: “Help, help.” I told him to stop and I was calling 9-1-1….

When I got upstairs and looked down, the person that was on top beating up the other guy was the one laying in the grass, and I believe he was dead at that point.

When the police arrived at the scene they noted that Zimmerman was bloody in the face and head, and the back of his shirt was wet and had grass stains on it, indicating that there had been a struggle before the shooting.

After looking at all the available information, Massad Ayoob, a firearms instructor and renowned expert witness in such cases, concluded that “we don’t know enough about what happened to rush to judgment yet.” Said Ayoob:

The autopsy results, including toxicology screen, have not yet been released. If it turns out that the young man who died was fueled by drugs known to cause violent behavior, could that change our perceptions? That knowledge is not yet in our hands. (Reportedly, Zimmerman was not tested, and police indicate that he showed no signs of drug or alcohol impairment)….

The death weapon was a Kel-Tec PF9 semiautomatic 9mm pistol. It has been reported that the gun was recovered with a full magazine and that only the chambered round had been fired. This is a condition we associate with something preventing the gun from cycling a fresh round from the magazine into the chamber after the shot was discharged. One thing that can cause that is another man’s hand wrapped around the pistol, retarding its slide mechanism. This would indicate, as could certain gunshot residue patterns or cuts in certain places if found on Trayvon Martin’s hand(s), that a struggle for a gun was taking place when the fatal shot was fired. This would clearly change the shape of the case. But—WE DON’T KNOW YET.

Hopefully as additional evidence is revealed, tempers and threats will subside so that justice can be served through careful and objective examination. George Zimmerman’s attorney, Craig Sonner, isn’t so sure:

This case is spinning out of control. I hope there’s a way to rein things in [and that] things come back so that there can be a time for justice and for healing and not just skipping the whole judicial process and going straight to sentencing.

Gun Control Second Amendment
This entry was posted on Wednesday, March 28th, 2012 at 9:38 am and is filed under Constitution, Politics. You can follow any responses to this entry through the RSS 2.0 feed. Both comments and pings are currently closed.
Many of the articles on Light from the Right first appeared on either The New American or the McAlvany Intelligence Advisor.