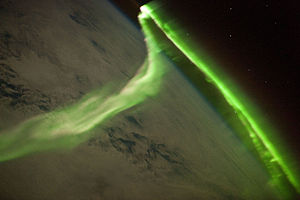 Many were surprised when the prediction by the National Aeronautics and Space Administration (NASA) of potential major disruptions of power grids, Global Positioning System (GPS) satellites, and internet communications as a result of a solar storm failed to materialize. Most were likely totally unaware of the threat.

Sunspots moving across the surface of the Sun have an 11-year cycle similar to hurricane cycles, and toward the end of the cycle they tend to explode, resulting in a “coronal mass ejection” (CME)—a massive burst of solar particles. The current cycle is nearing its end in 2013 and NASA and others have been watching it carefully. NASA spokesman Alex Young explained that the CME that headed towards Earth earlier this week was pointed in the same direction as the Earth’s magnetic field and so its impact was “soft,” much like an automobile merging into highway traffic.

But it could have been worse. Much worse. Young explained: “If [the fields] are opposite each other…then there’s a much stronger interaction. It allows much more energy to be pumped into Earth’s magnetosphere.” The analogy of the automobile merging onto the highway is apt if the car is now trying to enter the highway from the wrong direction into oncoming traffic.

More eruptions are possible, says Young, much like watching a mole to see if it’s cancerous or not:

When you monitor a mole, they tell you, as long as it stays in a nice symmetric shape and it doesn’t become really complicated and complex, it’s OK.

It’s the same sort of thing with sunspots…. When they become complicated and twisted, then that means the magnetic fields inside of them have become more twisted….

Right now we have been monitoring that sunspot, and it is getting more complex. What that tells us is there is still the strong possibility of another X-class [huge] flare.

Peter Riley, a senior scientist at Predictive Science in San Diego, California, ran some numbers to see what the chances might be of this turning into something worrisome, and he concluded there was only a 12 percent chance of any impact on Earth during the present period. But to Riley, that’s a much bigger number than it appears: “Even if it’s off by a factor of two, that’s a much larger number than I thought.” Preppers and end-of-the-world theorists jumped all over that with end-times predictions of another “Carrington Event.”

Amateur British astronomer Richard Carrington was doing solar observations in late August, 1859, when he noted huge flares emanating from the sun’s surface. At noon on September 1, the biggest flare erupted sending an enormous CME directly towards Earth. Within 17 hours effects were being felt all over the Earth, and Carrington concluded it was because of the Sun’s eruption. On September 3, 1859, the Baltimore American newspaper reported:

Those who happened to be out late on Thursday night had an opportunity of witnessing another magnificent display of the auroral lights. The phenomenon was very similar to the display on Sunday night, though at times the light was, if possible, more brilliant, and the prismatic hues more varied and gorgeous. The light appeared to cover the whole firmament, apparently like a luminous cloud, through which the stars of the larger magnitude indistinctly shone. The light was greater than that of the moon at its full, but had an indescribable softness and delicacy that seemed to envelop everything upon which it rested. Between 12 and 1 o’clock, when the display was at its full brilliancy, the quiet streets of the city resting under this strange light, presented a beautiful as well as singular appearance.

Telegraph systems all over Europe and North America failed with some operators suffering electrical shocks and others reporting telegraph paper catching fire from sparks emitted from the telegraph equipment. Miners were awakened from their sleep and started preparing breakfast in the middle of the night. People could read their evening newspapers from the auroral anomaly.

The parallels to the present-day internet, relying on digital systems and satellites, are obvious. Tom Bogdan, director of the U.S. Space Weather Prediction Center in Boulder, Colorado, said that if the current sunspot erupts with a massive CME, “What’s at stake are the advanced technologies that underlie every aspect of our lives.” Such a CME would come in three waves: High energy sunlight consisting mostly of x-rays and ultraviolet light would ionize the Earth’s upper atmosphere, followed by a radiation storm, and then finally a slower-moving cloud of highly charged particles that could disrupt satellite communications for a period of time.

Daniel Baker, a scientist with the Laboratory for Atmospheric and Space Physics, said even buying gasoline from a self-service station would be impossible: “Every time you purchase a gallon of gas with your credit card, that’s a satellite transaction.” But that’s a small inconvenience when compared to the potential destruction the solar particles could have on giant electrical transformers that power the electric grid itself. If any number of them were incapacitated, if might be days or weeks or even longer to get them back online.

Tess Pennington, author at her nutrition website ReadyNation.com, explored the potential consequences of such incapacity:

During these times when entire metropolitan areas or regions experience blackouts, we get a glimpse into what a truly widespread emergency might look like. It is often the case that the first thing residents of affected areas do is rush to grocery and hardware stores hoping to acquire critical supplies of food, water, batteries, flashlights and generators.

It’s highly unlikely that the present sunspot moving across the surface of the Sun will shut down life as it exists on planet Earth. NASA’s early warning system would alert power companies in plenty of time to protect their generators by taking them offline before the eruption hits. A staggered protection protocol would result in rolling blackouts. Besides, the storms pass quickly, lasting perhaps only a few hours.

There are some things to be aware of but not to worry about. The current potential eruption from the Sun is one of them.

Energy Internet
This entry was posted on Monday, March 12th, 2012 at 4:48 am and is filed under History. You can follow any responses to this entry through the RSS 2.0 feed. Both comments and pings are currently closed.
Many of the articles on Light from the Right first appeared on either The New American or the McAlvany Intelligence Advisor.