Allen Stanford, former chairman of the Stanford Financial Group of Companies, was convicted on Tuesday on 13 counts of fraud, conspiracy, obstructing justice, violating U.S. securities laws—for operating a Ponzi scheme. Sentencing is scheduled for June, which could result in Stanford remaining behind bars for at least another 20 years.

The scheme, valued at $7 billion at its zenith, has only $300 million in various accounts. Another jury has just ruled these accounts may be seized for potential customer restitution.

The Ponzi scheme was elegantly simple. Stanford’s offshore bank in the British overseas territoryof Montserrat was closed down for “irregularities” in the mid-1980s so he moved it to Antig 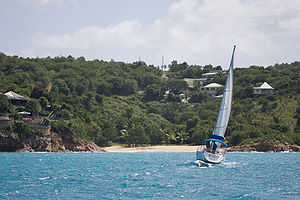 ua where he ingratiated himself, using investors’ money, with the local government by lending it millions of dollars and building government administration offices and a hospital. Meanwhile his investors were fooled into thinking they were buying ultra-safe Certificates of Deposit paying above-market rates of interest. His influence went way beyond the local government, however, with regular, sometimes daily, flights of U.S. Senators and Congressmen coming to Antigua to partake of Stanford’s generosity and enjoy his lavish parties. As Mikeda Mikel, the owner of a private jet company in Antigua explained: “They were partying on yachts in an exclusive resort, and when you have US politicians supporting a man like Mr. Stanford on an island as small as Antigua…if you had any doubts before [about his honesty] they go out the window. America has sanctioned him [therefore] he’s good to go.”

By investing in regulatory “protection,” Stanford was able to live for years on his investors’ capital without being disturbed by annoying questions into how he could pay such generous dividends to his clients. As Gaston Browne, chairman of the Antigua Labour Party (ALP), which was in power during Sanford’s heyday, said:

I can’t see how anyone would want to blame the Antiguan government…. The US government couldn’t prove he was running a Ponzi scheme, then how would they expect our regulators with less experience, less resources be in a position to do something?

At least four separate times the Securities and Exchange Commission (SEC) was warned that something was fishy in Antigua, and four times the nascent investigation was shelved. Various reasons were given: lack of experience, the case was too complex and was going to take too long, other cases were given higher priority, and assurances from Stanford’s top people were believed rather than proven.

One of the key reasons for the SEC’s reticence to mess with Stanford was Spencer Barasch, enforcement director for the SEC’s Fort Worth office. Each time the Stanford case was brought to his attention, he either discouraged or outright terminated it. At one point Barasch asked a Stanford spokesman if there was anything to be concerned about and was told “there wasn’t anything” to the charges. Julie Preuitt who worked for Barasch at the time said, “He was satisfied with that and decided not to pursue it further.”

Even after Stanford was arrested in February 2009, Barasch offered to represent Stanford before the commission. When he was reminded by the commission that it was unethical for him to do so, Barasch explained: “Every lawyer in Texas and beyond is going to get rich over this case, OK? And I hated to be on the sidelines.”

Barasch now denies all of this according to one of his law partners at the firm Barasch joined after leaving the SEC. Bob Jewell, the managing partner at Andrews Kurth LLP, defended Barasch:

Spencer Barasch served the SEC with honor, integrity and distinction. We believe he acted properly during his contacts with the Stanford Financial Group and the Securities and Exchange Commission. He did not violate conflicts of interest.

That statement failed to mention that on January 15, 2012, the U.S. Justice Department settled civil charges that Barasch did in fact block or close “at least three investigations into the activities of disgraced…financier Allen Stanford” with Barasch paying a $50,000 fine—the maximum fine for a violation of U.S. federal conflict-of-interest rules. The settlement let Barasch off easy with the Justice Department deciding, as part of the agreement, not to pursue criminal charges against him.

In a study of “regulatory capture”—which is when regulators get subsumed and employed by the entities that they are supposed to monitor for fraud—by Frank Perri and Richard Brody prepared for the journal Financial Regulation and Compliance, the authors analyzed the SEC’s lack of diligence concerning the Ponzi schemes of both Bernard Madoff and Allen Stanford. Entitling it “The Sleeping Watch Dog,” they concluded,

The SEC’s failures are symptomatic of a myriad of inter-related problems, such as a culture that discourages examining frauds that appear [too] complex, [staff] attorneys who do not have…understand[ing of] how the frauds they are charged to prevent actually occur….

The SEC’s staff appears to be “captive” to private organizations on Wall Street because the people they intend to regulate are viewed as their future employers once they leave their public service employment.

Authors Perri and Brody added that when a regulatory agency is taken over by the very parties it is supposed to regulate, the people the agency is designed to protect are the ones hurt the most. The façade of safety, integrity, and honesty lowers an investor’s guard, which then allows schemers like Stanford to take advantage of them. As Mikeda Mikel said, “America…sanctioned him, [therefore] he’s good to go.”

Conspiracy Corruption Department of Justice Fraud Local Government Ponzi Scheme SEC Wall Street
This entry was posted on Friday, March 9th, 2012 at 2:19 pm and is filed under Constitution, Economics, Politics. You can follow any responses to this entry through the RSS 2.0 feed. Both comments and pings are currently closed.
Many of the articles on Light from the Right first appeared on either The New American or the McAlvany Intelligence Advisor.