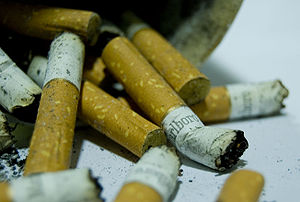 On Wednesday U.S. District Court Judge Richard Leon ruled in favor of five tobacco companies protesting requirements by the Food and Drug Administration (FDA) to have them put on their cigarette packs graphic images of the consequences of smoking.

At issue was the right of free speech guaranteed under the First Amendment to the Constitution: “Congress shall make no law…abridging the freedom of speech…” When Congress passed the Family Smoking Prevention and Tobacco Control Act (FSPTCA) in June of 2009, it gave regulatory authority over tobacco products to the FDA, requiring it to develop a new tobacco-regulation center.

The newly created center was only too happy to spell out the “rules” tobacco companies must now follow in its advertising, including images and statements on cigarette packs. When horrific images were required to be placed on packs, five tobacco companies sued, claiming infringement on their First Amendment free speech rights. Judge Leon agreed.

The companies argued that the images go way beyond the simple conveying of facts to the consumer but reach into actual forced advocacy of a government position, turning the companies’ advertising into billboards for government policy. The judge wrote that those images “were neither designed to protect the consumer from confusion or deception, nor to increase consumer awareness of smoking risks; rather, they were crafted to evoke a strong emotional response calculated to provoke the viewer to quit or never start smoking.” He added,

While the line between the constitutionally permissible dissemination of factual information and the impermissible expropriation of a company’s advertising space for government advocacy can be frustratingly blurry, here the line seems quite clear.

The response from the Department of Health and Human Services under which the FDA operates was immediate. Said the HHS, “This public health initiative will be an effective tool in our efforts to stop teenagers from starting in the first place and taking up this deadly habit. We are confident that efforts [like this one from Judge Leon] to stop these important warnings from going forward will ultimately fail.”

Constitutional scholar Floyd Abrams agreed with Judge Leon’s ruling, noting that “the government…is free to speak for itself, but it may not, except in the rarest circumstance, require others to mouth its position.”

The proposed required images are indeed graphic, some of which may be seen here and include pictures of a man exhaling cigarette smoke through a tracheotomy hole in his throat, a pair of diseased lungs next to a pair of healthy lungs, a diseased mouth with cancerous lesions, as well as a cadaver on a table with post-autopsy chest samples.

On the other hand, another lawyer, Richard Daynard, who heads up the Tobacco Products Liability Project, rejected Judge Leon’s reasoning, holding instead that the government’s interest in public health overrides the protections provided by the First Amendment. The government, he said, has a “compelling state interest, a public interest, to restrict the advertising of cigarettes.” The ruling “shows a complete lack of sensitivity to the public health dimensions of the smoking epidemic, for the fact that’s been elaborately demonstrated over and over again that tobacco marketing encourages kids to start smoking.”

In simple terms, the government, according to Daynard, knows that smoking is bad, smoking is unhealthy, smoking costs people millions of dollars and shortens their lives and therefore the government has to do whatever it can to protect consumers from the result of making bad choices such as deciding to smoke cigarettes. Missing from the conversation, as always, is how the free market would provide the consumer with the same information without state intervention and coercion.

Bruce Yandle wrote in The Freeman that “marketplace recognition of health problems” caused by smoking preceded government regulations and force by decades. Some will remember terms used to describe cigarettes long before the government decided to get into the act: “coffin nails,” “smoker’s cough,” “gasper,” ”wheezer,” and “lung duster.” Also missing from the conversation is the right of an individual to choose, even if he makes a bad choice.

It’s unfortunate that those days are gone when choice about what a consumer would inhale or ingest or inject was a private matter with private consequences for bad choices. Now the conversation is wholly dedicated to how the government can protect consumers from their own bad choices, even at the cost of essential freedoms, such as the freedom of speech. Judge Leon’s ruling, while correct, may be only temporary as government’s insatiable desire to rule citizens’ lives and their personal decisions continues to grow.

Constitutional First Amendment Free Market Free Speech Freedom HHS Marketing Regulations
This entry was posted on Saturday, March 3rd, 2012 at 12:31 pm and is filed under Constitution. You can follow any responses to this entry through the RSS 2.0 feed. Both comments and pings are currently closed.
Many of the articles on Light from the Right first appeared on either The New American or the McAlvany Intelligence Advisor.