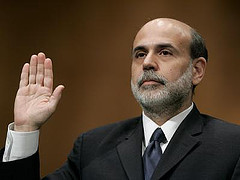 In a moment of unexpected and unsettling candor, Federal Reserve chairman Ben Bernanke, in his testimony on Tuesday before the House Financial Services Committee, said that he really doesn’t know what’s happening to the economy. In his best professorial manner and without blinking an eye, the chairman said, “In light of somewhat different signals received recently from the labor market than from indicators of final demand and production…it will be especially important to evaluate incoming information to assess the underlying pace of the economic recovery.”

Admitting that the labor market is “far from normal” made it clear that he was uncertain about what “normal” actually means. With the same number of people working (about 130 million) today as were working 10 years ago (with a much smaller population) the new normal may be different from whatever the chairman might perceive it to be. Part of the problem is in the counting and part is in the vast technological improvements that have permanently replaced low-level workers.

When it comes to counting, the Bureau of Labor Statistics has difficulty in keeping score, noting two primary indicators of unemployment: U3 and U6. U3 is more politically palatable as it is lower than U6. U6 may be more realistic, however, as it counts not only people out of work but also those working part-time who would rather be working fulltime, along with those discouraged and not looking at all.

Despite being unsure of what all the “somewhat different signals” really mean, Bernanke was ready to predict the future: “With output growth in 2012 projected to remain close to its longer-run trend [a weak 2.3- to 2.6-percent annual growth in the economy], FOMC (Federal Open Market Committee which Bernanke chairs and rules] does not anticipate further substantial declines in the unemployment rate over the course of the year.”

He also predicted that despite the enormous bout of monetary stimulus employed allegedly to reinvigorate the moribund economy, inflation would remain low, in the range of between 1.4 and 1.8 percent for the year.

And then came the caveats. All these projections and predictions are out the window if gasoline prices continue to rise, or if the European financial crisis continues to spiral downward putting pressure on US exports, or if the housing market fails to rebound strongly, or if the banks start lending again thus allowing their excess reserves to drive price inflation upwards.

Sandra Pianalto, the president of the Cleveland Federal Reserve and a new member of Bernanke’s FOMC, also admits that the Fed is clueless. In a recent speech at an economic development meeting in Westfield Center, Ohio, she said:

We do not have a good deal of concrete history for monetary policy to fit our current circumstances, but I am confident the Federal Reserve is making the most of its tools to move the economy in the right direction.

This is banker-talk for saying “we don’t know where we’re going but we’re making great time.”

Nor is she concerned about inflation, using the government-issued and massaged numbers to back up her case: “Inflation is a monetary phenomenon. The Federal Reserve can control the inflation rate,” noting that the Fed’s “target” of 2.0 percent annually is way above those fudged numbers Bernanke mentioned. Don’t ask John Williams about the real inflation rate, however. His best estimate of current price inflation (monetary inflation has already taken place thanks to the Fed’s quantitative easings) is three times higher than the Fed’s 2.0 percent target.

Pianalto inadvertently let one critical piece of information out of the bag: with a predicted “moderate economic recovery” with growth in the economy of about 2.5 percent, and inflation at “close to” 2 percent, the real (inflation-adjusted) growth in the economy is essentially stalled. She admitted: “We are…in a challenging environment for monetary policymakers.”

Part of the challenge is that the Fed appears to be making up policy as it goes along. As long as “the unemployment rate [is] elevated and the inflation rate subdued, [we think] that sustaining a highly accommodative stance for monetary policy is consistent with promoting both objectives.”

Since business owners and entrepreneurs don’t like uncertainty, there are several things that Bernanke and Pianalto could do immediately to reduce uncertainty. First, stop admitting publicly that the Fed doesn’t know what it’s doing. Second, stop buying government bonds and let the bond market price accurately the real interest rates for those securities. Those rates would be much higher than zero, but at least then they’d be real, and risk-takers would be able to make better economic decisions. It would also help those dependent upon interest payments (bond holders, pension plans, and retirees) who have suffered mightily (and silently) as their payments have dropped dramatically as a result of Fed policy.

Such moves wouldn’t cure everything but it would be a good start.

Ben Bernanke BLS Central Bank Currency Economy Environment Federal Reserve Fiat Currency Housing Market Inflation Interest Rates Monetary Policy Paper Money Pension Quantitative Easing Unemployment Unions
This entry was posted on Friday, March 2nd, 2012 at 4:54 am and is filed under Economics. You can follow any responses to this entry through the RSS 2.0 feed. Both comments and pings are currently closed.
Many of the articles on Light from the Right first appeared on either The New American or the McAlvany Intelligence Advisor.