China Hits Turning Point; Jobs Coming Back to the U.S. 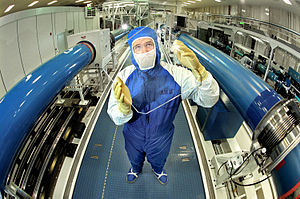 As reported earlier, the difference in wages between Chinese and American workers is narrowing rapidly. Part of the reason is that China has passed the Lewis Turning Point.

First noted by Bloomberg, that turning point hit the Chinese labor markets in the weeks following China’s Lunar New Year holiday in February, 2010, when hundreds of thousands of Chinese had to be enticed to come back to work. They were bribed with gifts, parties, and cash bonuses. Sunny Jia, sales manager for the Jufeng Handicraft Company which makes linen goods, leather bags, and cabinets for retailers in Britain and the United States, explained, “We needed to do more to make them stay.”

Honda was forced to raise wages by 24 percent at one of its parts-making plants after it was shut down by a strike demanding better pay. Foxconn Technology more than doubled its base salary to reduce worker discontent. All of which is going to prove the theory of economist Arthur Lewis that when the supply of cheap labor disappears, wages must rise. At the time, Huang Yiping, an economist at Citigroup, predicted: “If the first decade of the 21st century saw China rapidly rising as a global manufacturing center, the post-Lewis turning point could see the opposite. Global manufacturing activities concentrated in China today may find their way elsewhere.”

That is already happening. Last year U.S. factories added 237,000 jobs and another 173,000 are estimated to be added this year. National Cash Register moved its manufacturing facility building ATMs from China to Columbus, Georgia. General Electric is adding capacity to produce water heaters once built in China to their Louisville, Kentucky plant. Farouk Systems, which makes hair dryers, moved 1,500 jobs back from China. Coleman moved its water heater facility back to the United States.

It’s the math. By the time every part of the economic equation is analyzed—which includes not only wages but rising land costs, the long time to it takes to deliver the finished product, the rising costs of shipping and transportation, the necessity to make and monitor changes in final products as well as risks to intellectual property theft in China—it is making more sense than ever to bring back those operations and the jobs associated with them to the United States.

In addition, it is America’s continuing superiority in the fields of artificial intelligence, robotics, and digital manufacturing that are tilting the advantage back to the United States. Those advantages are especially pronounced in computers, electronics, and appliances as well as plastics, rubber, and machinery. For instance, a new factory in upstate New York, designed to make computer chips, will be fully automated using calibrating robots and miles of overhead tracks to move the product from machine to machine. Eric Ghoh, the general manager at GlobalFoundries, said, “This factory is designed to be fully automated, meaning theoretically it requires no human intervention at all.” Of course it takes engineers and programmers to run the software and keep the machines in tolerance, but, said Ghoh, “compared to 20 years ago, today we don’t need a lot of labor.”

On the surface such advances appear to require fewer and fewer “shop floor” workers. But the need for those technicians and programmers has grown eight-fold over the past few years and continues to keep the United States as the world’s largest manufacturer of finished goods.

Hal Sirkin, senior partner at Boston Consulting Group, explained: “Between 1972 and 2010, production of manufactured goods [in the United States] increased two-and-a-half times. We do that with 30% less labor, which is an amazing increase in productivity. Our society has gotten incredibly productive. We use our resources very efficiently and that makes all the difference.”

When cheap labor costs in Japan were exploited by American companies in the 1970s, it was estimated that “Japan, Inc.” would take over all American manufacturing. In the 1980s when low labor costs in Taiwan, Hong Kong, and Singapore enticed American manufacturers to move their facilities there, it was called the era of the “Asian Tigers.” These threats faded as the United States continued to innovate and grow its technical base. When China began its efforts to catapult its agrarian economy into the 21st century, it was feared that this would herald the start of the “China century” and the end of manufacturing in the United States. Instead, that prediction is proving to be false as well.

Said Sirkin: “Wages are rising very quickly in China, somewhere on the order of 15% to 20% a year and maybe even higher.” He added:

In 2001, when China entered the WTO [World Trade Organization], you could get workers for 58 cents an hour. It was a very simple decision for most companies to off-shore [jobs] to China. [Since then those] wages have risen a lot…

It will just make more sense to produce in the US. Companies are starting to turn on to this.

Concerns that America’s manufacturing base is continuing to decline and will eventually disappear altogether are greatly overstated. Political attempts to intervene in the process by the present administration or suggested by some Republican presidential candidates such as Rick Santorum will turn out to be costly failures. The market will continue to make all the adjustments needed on its own without interference from statists who think they know better. Just ask economist Lewis.

China Economy Jobs Republican Rick Santorum Technology Theft Unions
This entry was posted on Thursday, March 1st, 2012 at 4:56 am and is filed under Economics. You can follow any responses to this entry through the RSS 2.0 feed. Both comments and pings are currently closed.
Many of the articles on Light from the Right first appeared on either The New American or the McAlvany Intelligence Advisor.