The Greek Deal Saves the Banks 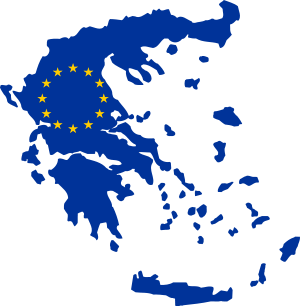 Following a 13-hour marathon session on Monday, eurozone ministers announced an agreement to loan Greece another $170 billion, which saves the banks while punishing private investors and damaging Greek national sovereignty.

The bailout brings the total spent or committed to save the eurozone countries of Greece, Ireland, and Portugal to $500 billion with little assurance that more won’t be needed very soon. Details of the agreement require that 90 percent of private bondholders agree to take a 53-percent haircut on their investments by exchanging old bonds for new. It requires acquiescence by Austria, Finland, Germany, the Netherlands, and Slovenia to allow the European Central Bank and the International Monetary Fund to part with the funds. And it forces Greece to accept permanent and rigid enforcement of debt service payments by outsiders monitoring government revenues and expenditures and forcing debt service payments to be made ahead of any other government commitments.

The parties who come out whole on the deal are, naturally, the European Central Bank and other banks that hold Greek debt. Their holdings will be paid off at par.

Observers with chips in the game were decidedly guarded in their enthusiasm. Joerg Kraemer, chief economist at Commerzbank AG in Frankfurt, said, “Greece will find it difficult to shoulder even the reduced debt in the long run if it does not implement [the required] far-reaching reforms. The probability will rise in the second half of the year that a frustrated EU (European Union) stops payments to Greece.” Callum Henderson, head of research at Standard Chartered in Singapore, asked rhetorically: “Does this [deal] alleviate the risk of imminent default? Yes, but not further out. Further out, the concerns of a default will keep coming back.”

Barclays Capital noted the many hurdles still facing Greece to get the money. The 90-percent participation rate among unhappy private investors over acceptance of the “voluntary” 53 percent haircut is going to be a stretch, especially when the banks themselves are protecting themselves from any losses under the agreement. Failure would trigger an “enforced” participation which would then force banks holding credit default swaps (CDS) as insurance to pay out huge sums to make the investors whole.

Investment house ING said that the deal should save Greece “at least for the next couple of months.” But there is nothing in the deal to help Greece restore confidence in its economy—it’s all been focused on mandates and increased outside intervention. A spokesman for ING commented, “The return of economic growth in Greece is largely based on the principle of wishful thinking.” BNY Mellon says that the effort to bring down Greece’s debt to GDP ratio from 164 percent to 120 percent by the year 2020 will “very likely exacerbate an already severe recession [and] may very well still leave it requiring an additional bailout…”

Capital Economics expressed the dourest outlook on the deal:

In all, if no new hurdles arise (a big if), the latest deal should prevent a disorderly Greek default on March 20th when €14.4 billion [$19 billion] of debt matures. But with the recession thwarting debt reduction efforts and public outrage growing, we still see Greece leaving the euro zone before the year is out.

But the banks will be saved and protected regardless. As the Wall Street Journal noted, “In what appears to be a victory for the European Central Bank (ECB), the agreement spares the Euro system—which consists of the ECB and the national banks from the eurozone—from taking any losses on their holdings of Greek debt…The ECB [successfully] resisted pressure to accept ‘haircuts’ on the estimated $75 billion [of Greek debt which it owns]…”

The Journal went on to add:

In what sets a new landmark for the willingness of the euro zone to intrude on member states’ traditional fiscal rights, Greece will be subject to increased internal control and scrutiny in exchange for the bailout. Euro-zone finance ministers agreed that a task force from the European Commission will have an “enhanced and permanent” presence in Greece to ensure that the country implements a raft of painful reforms attached to the deal.

So there it is: The banks that loaned Greece the funds that they spent and can’t repay will be kept whole by the new deal. In exchange the Greeks now will suffer the indignity of the physical presence of outsiders keeping tabs on their own government’s revenues and mandated austerity measures to make sure they keep their part of the bargain. Private investors don’t get their money back. Instead they get another piece of paper that is worth half of what the previous piece of paper was allegedly worth. And they won’t even get that if they don’t agree to the deal “voluntarily.”

What can go wrong? For one thing, the private investors might decide not to “volunteer,” which would compel the Greek government’s “overseers” to force them to take the deal, which would trigger repayments under the CDSs held by the big banks. Secondly, there could be a glitch in getting the other members of the eurozone to go along with the deal in light of how such draconian practices might have to be applied in their own deteriorating economic circumstances. Seeing major surgery performed without anesthetic by outsiders on one of their own isn’t likely to encourage them to agree to empower those same outsiders who just might want to perform similar surgery on themselves. Thirdly, the natives are restless. Aside from the riots making front page headlines all over the globe and an economy that it is its fifth year of recession, the Greeks have an election coming up in April. Parties not interested in participating in the agreement are gaining strength every day.

Austerity Central Bank Currency Economy European Central Bank Eurozone Fiat Currency GDP Greece IMF Insurance Paper Money Portugal Recession
This entry was posted on Wednesday, February 22nd, 2012 at 4:15 am and is filed under Economics. You can follow any responses to this entry through the RSS 2.0 feed. Both comments and pings are currently closed.
Many of the articles on Light from the Right first appeared on either The New American or the McAlvany Intelligence Advisor.