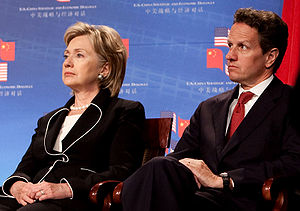 Geithner has remained silent; however, a spokesman for the Treasury Department, Anthony Coley, said he couldn’t understand what all the fuss is about: “Treasury and the Fed have provided thousands of pages of documents and arranged for depositions of numerous other witnesses.” [Emphasis added.] In light of all that disclosure, Coley said, “it is unclear why the plaintiffs [Lehman’s committee] continue to insist on unnecessary depositions.”

Geithner has been less than forthcoming on previous occasions as well. In January 2010 Rep. Darrell Issa (R-Calif.) released a series of emails between American International Group (AIG) and the New York Fed in which the Fed urged AIG not to disclose the full details of bailouts to various banks which AIG insured using derivatives. At the time, AIG’s credit swaps insured half of the western world’s banking system. When those derivatives failed, the banks and AIG were bailed out with taxpayer funds. Geithner was in charge at the New York Fed while this was going on. When Geithner was finally forced to testify in that case, he defended those payouts and denied any attempt to withhold information. His testimony was greeted with disdain, skepticism, and anger by members of the House Oversight Committee who heard it.

If Geithner is forced to testify, it could further confirm the high-level corruption and self-dealing that surrounded the Lehman collapse and remind taxpayers of how such manipulations have cost them billions. In light of the March 16 deadline, it is clear to observers that his strategy is to lie low and keep quiet. As Graham Summers, writing at ZeroHedge, put it, “The only reason this process hasn’t already reached a fever pitch is because the benefits of not talking for most of those who were in on the corruption still outweigh the consequences…” [Emphasis in original.]

With Geithner’s announcement that he won’t stick around for another term if Obama is reelected, it seems possible, if not probable, that by waiting out the clock he will escape unscathed into oblivion. On the other hand, if he is forced to testify, and his testimony does show the suspected back-room dealings involved in saving JPMorgan at Lehman’s expense, then the lid so tightly fastened on the investigation to date will be removed. If that happens, says Gary North, “the public will find out about the nature of crony capitalism [and] the voters’ trust in the existing system will disappear.”

Bailouts Banking Bankruptcy Capitalism Corruption Crony Capitalism Darrell Issa Gary North JPMorgan Chase Lehman Brothers Obama Timothy Geithner
This entry was posted on Tuesday, February 21st, 2012 at 4:00 pm and is filed under Economics, Politics. You can follow any responses to this entry through the RSS 2.0 feed. You can leave a response, or trackback from your own site.
Many of the articles on Light from the Right first appeared on either The New American or the McAlvany Intelligence Advisor.