Obamanomics, the State of the Union, and Reality 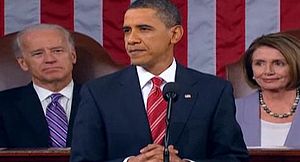 In his State of the Union address President Obama touted the “rebound” in the economy, taking credit for his administration’s policies in its recovery. He pointed to two years of job growth and the fastest job creation since 2005 but without putting such results in context.

Among the first to take umbrage at such omission was James Sherk, writing for the Heritage Foundation: “In normal economic times they [the results]would represent healthy growth, but in the aftermath of the worst recession in two generations they represent a historically slow recovery. New jobs have been created—but not nearly enough.”

This was echoed by the Congressional Budget Office (CBO) in its just-released study which noted,

The rate of unemployment in the United States has exceeded 8 percent since February 2009, making the past three years the longest stretch of high unemployment in this country since the Great Depression. Moreover, the Congressional Budget Office (CBO) projects that the unemployment rate will remain above 8 percent until 2014.

The official unemployment rate excludes those individuals who would like to work but have not searched for a job in the past four weeks as well as those who are working part-time but would prefer full-time work; if those people were counted among the unemployed, the unemployment rate in January 2012 would have been about 15 percent.

Compounding the problem of high unemployment, the share of unemployed people looking for work for more than six months—referred to as the long-term unemployed—topped 40 percent in December 2009 for the first time since 1948, when such data began to be collected; it has remained above that level ever since. [Emphases added.]

When the unemployment claims numbers from the Department of Labor were announced on Thursday, they showed improvement over the previous three weeks, with initial claims at 348,000, down from 373,000 at the end of January, and the four-week moving average also declining slightly. However, the temptation to see what’s in back of those finessed results was too much for Lee Adler: “I like to look behind the headlines at the real unadjusted, unmassaged, unmanipulated numbers to get some idea of what’s really going on,” he observed. After reviewing the numbers and headlines, Adler pointed out that 111.9 million people had full time jobs in January compared with 119.3 million just three years earlier. He asked “They call that a ‘recovery?’”

The Gallup Poll on U.S. employment differed sharply from the numbers offered by the CBO. According to Gallup the percentage of people working compared to the total population is actually declining during this “recovery” while the percent underemployed has been increasing to nearly 20 percent. Gallup explains that the data are derived from telephone calls to 30,000 adults and are not seasonally adjusted as are the numbers from the CBO.

RealtyTrac looked at a different part of the economy—the housing market—and noted that the number of foreclosures in January accelerated sharply from December and that the number would exceed one million in 2012. Part of the blame is due to the recent foreclosure settlement which now gives banks rules to follow in moving through the massive inventory of foreclosed homes that were put on hold. Explained Daren Blomquist, a RealtyTrac vice president, “The settlement will accelerate the foreclosures that are happening this year and it will accelerate the process of lenders catching up on the backlog of foreclosures that has been building up over the last year and a half.”

As those foreclosures finally come to market, they will inevitably push down prices in the neighborhoods, putting more pressure on homeowners who have been making their payments despite being underwater. Many will finally throw in the towel and walk away from their homes, seeing no end in sight for a recovery and no reason to continue to throw good money after bad. Estimates vary, but housing prices are expected to decline between 5 and 15 percent over the next 12 to 18 months, keeping the lid on excessive exuberance over any pending recovery there.

Why is this recovery, such as it is, taking so long? The Depression of 1920-21 began in January 1920 and ended in July of 1921. Job losses were just as severe then as they were in the current recession, with unemployment skyrocketing to nearly 12 percent at its worst. But by 1923 employment gains had fully restored the economy. The AT&T Index of Industrial Productivity declined by nearly 30 percent but then shot up by 60 percent, meaning that that depression had the most severe decline and the most robust recovery of any since the turn of the century. Historian Thomas Woods, in his article “Warren Harding and the Forgotten Depression of 1920,” explains that it was Harding’s “intentional non-influence” and aggressive cutting of government spending that let the free market right itself from the distortions created by the great war. Noted Woods: “It is not in spite of the absence of fiscal and monetary stimulus that the economy recovered from the 1920-21 depression. It is because those things were avoided that recovery came.” [Emphasis added.]

The President’s continued insistence that any recovery is due to his administration’s policies of interference, intervention, and stimulation overlooks the lessons from history. When it comes to government involvement in the economy, less is more.

CBO Economy Free Market Great Depression Heritage Foundation Housing Market Jobs Obama Recession Spending Unemployment Unions War
This entry was posted on Monday, February 20th, 2012 at 4:16 am and is filed under Economics, Politics. You can follow any responses to this entry through the RSS 2.0 feed. You can leave a response, or trackback from your own site.
Many of the articles on Light from the Right first appeared on either The New American or the McAlvany Intelligence Advisor.