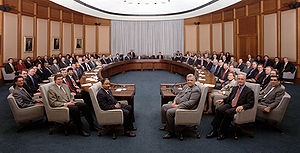 Economists polled by Reuters predicted that the recession in Europe that began late last year would continue into the new year and they weren’t disappointed. Reuters announced that economic output in the 17-member eurozone declined by 0.3 percent in the last quarter of 2011, the sharpest since the second quarter of 2009 at the start of the recession. Those same economists are now predicting that European GDP growth will stay negative at least for the rest of the year with only modest chances of improvement in 2013.

The International Monetary Fund (IMF) has the same negative expectations, predicting at least a 0.5-percent contraction of the eurozone countries next year. Even Germany, long the anchor to windward and the engine of growth for the European community, went negative in the last quarter compared to its modest growth rate of 0.6 percent in the third quarter.

Investment banking firm ING admitted that the decline caught their forecasters by surprise. Carsten Brzeski said the economic contraction “turned out to be weaker than expected.”

The Netherlands declined into recession (defined as two quarters of declines in GDP, or “negative growth” in economic parlance) with its third quarter contraction of 0.4 percent followed by another 0.7 percent decline in the fourth. Italy’s economy dropped by 0.7 percent in the last quarter with little improvement expected for at least a year. This puts Italy into the same recessionary camp as Belgium, Portugal, and Greece.

Portugal may be looking for another bailout as its economy suffered at 1.3 percent decline in the fourth quarter, more than double the 0.6 percent decline from the third quarter.

But Greece is the basket-case poster child for economic performance, with a stunning seven percent decline in GDP year-over-year in the last quarter of 2011, coming on top of its staggering third quarter decline of five percent.

Keynesian economists refuse to believe that any of this is their fault. Instead, more stimulus is likely. Howard Archer, IHS Global Insight’s chief European economist, said he expects the European Central Bank (ECB) to lower its prime lending rate by another quarter of a percent, from 1.0 percent to 0.75 percent, but expects little to come of it: “We doubt that the eurozone will be able to avoid further contraction” despite the so-called additional stimulus of lower interest rates.”

Archer did get part of the problem right, however, blaming the declining economies on “tight credit conditions, austere fiscal policies and high unemployment.” Tight credit conditions are the bond market’s way of saying “we don’t think you’ll be able to pay us back, so we’re not going to lend you any more money.” Austere fiscal policies are the price countries have to pay to overcome previous overborrowing and overspending. And high unemployment is the natural result of such austerity.

The prime driver of the economic difficulties in the eurozone, the European Central Bank, was forced to admit that this “more negative outlook (was due) to additional fiscal consolidation in many euro area countries, a further tightening of credit conditions, lower confidence and a generally higher level of uncertainty.” [Emphasis added.] This is the market’s response to monetary intervention into normal financial operations.

Rating agencies have seen this coming for months. Fitch and Standard & Poor’s downgraded several eurozone countries last month, while Moody’s just now responded to the obvious by downgrading Italy, Malta, Portugal, Slovakia, Slovenia and Spain, and warned of similar action on Austria, France and Britain by putting their current AAA ratings on “negative” watch. This action by Moody’s went far beyond just these countries, however, by announcing that further downgrades are in the offing on 17 global and 114 European financial institutions as well, including UBS, Credit Suisse, Morgan Stanley, Barclays, BNP Paribas, Credit Agricole, Deutsche Bank, HSBC Holdings, Goldman Sachs, Bank of America and Nomura. Moody’s put the blame on the downgrades where it belongs: the bond market’s reluctance to continue to finance profligate spending:

Writing for Yahoo! Finance, Ian Chua said that with weak banks lending to weak countries that are increasingly unable to service those debts, the banks “have trapped Europe in a vicious circle.” This is the inevitable result of thinking that paper money created out of nothing can restore confidence and prosperity.  It does precisely the opposite, and the economies of the eurozone are now enjoying the bitter fruit from the central banking papier-mâché tree.

Austerity Banking Central Bank Currency Economy European Central Bank Eurozone Fiat Currency France GDP Germany Goldman Sachs Greece IMF Interest Rates Italy Keynesian Paper Money Portugal Recession Spain Spending Unemployment
This entry was posted on Saturday, February 18th, 2012 at 4:14 am and is filed under Economics. You can follow any responses to this entry through the RSS 2.0 feed. Both comments and pings are currently closed.
Many of the articles on Light from the Right first appeared on either The New American or the McAlvany Intelligence Advisor.