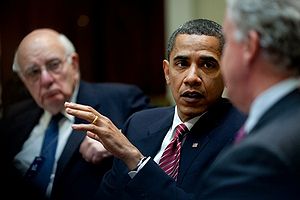 The strategy is clear: Delay the matter until after the elections when the entire game could change, including the need to reintroduce the legislation for congressional and presidential review, probably with many new faces perhaps more favorable to tabling the matter altogether. Dennis Kelleher, president of Better Markets, a nonprofit pro-regulation group, said, “It’s part of their ongoing strategy—if you can’t kill the rule, you may as well delay it as long as possible.”

From the enormous pushback being engineered by Wall Street, it can safely be assumed that trading with taxpayer-guaranteed funds is a very profitable activity, and the Volcker Bill has the potential for seriously impeding if not eliminating that revenue stream altogether. Delay would allow the affected firms to pony up political contributions in time for the election to influence outcomes favorable to the retention of their power.

Missing from the conversation is how simple such matters would be if left to the private market. Classical economics would call for those bearing the risks to suffer the consequences. If a bank or trading company suffered losses, they would suffer the consequences and change their behavior or go out of business. The free market is brutally effective that way. But it would solve any perceived problem of “proprietary trading” quickly, efficiently, and inexpensively. Government, in its proper role, would serve merely to enforce the laws of contract against fraud. The market would do the rest.

Bailouts Banking Central Bank Federal Deposit Insurance Corporation Federal Reserve Fiat Currency Free Market Goldman Sachs Insurance Obama Paper Money Paul Volcker Regulatory Agencies SEC Wall Street
This entry was posted on Friday, February 17th, 2012 at 1:11 pm and is filed under Economics. You can follow any responses to this entry through the RSS 2.0 feed. Both comments and pings are currently closed.
Many of the articles on Light from the Right first appeared on either The New American or the McAlvany Intelligence Advisor.