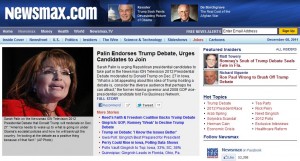 When Brandon Burgess, CEO of ION Television, named the producers of the upcoming Republican presidential debate being cosponsored by Newsmax, in Iowa on December 27, he was ebullient in his praise: “ION, Newsmax and Mr. Trump are committed to host a serious presidential forum which will include some of the most reputable journalists and media people in the country.” The debate will be produced by veterans of CNN, CBS, and NBC News.

Newsmax CEO Christopher Ruddy was no less enthusiastic: “With Donald Trump and the top-notch media and production team led by Eason Jordan [who was president of CNN’s news gathering for 23 years] we have organized, we expect that the Newsmax ION 2012 Presidential Debate will have the largest audience of any Republican primary debate to date.”

Those named to the production team reflect Ruddy’s long-standing and friendly relationship with the mainstream media, which goes all the way back to when Ruddy started Newsmax with money and significant help from Richard Mellon Scaife, heir to the Mellon banking interests and one of the 250 wealthiest individuals in the world. Scaife owns and publishes the Pittsburgh Tribune-Review, which has been criticized for its overt bias in favor of Democratic political officeholders in Pittsburgh. Scaife was known for ignoring campaign finance rules, donating nearly $1 million to President Nixon’s reelection campaign in 1972 but escaping without ever being charged. He also endorsed Hillary Clinton in her run for the Democrat party’s nomination in 2008.

Despite Ruddy holding a master’s degree in public policy from the London School of Economics, he was unable early on to get traction as a writer and worked for a while as a high-school teacher. He first caught attention through an article he wrote for the New York Guardian debunking a PBS documentary that illustrated, according to Ruddy, “how the media can manipulate facts and narrative to create a revised history both believable and untrue.” Those were lessons that he has taken to heart.

Ruddy developed an interest in the Vince Foster case and the controversy surrounding his death. In November 1994, he was hired by Scaife’s Pittsburgh Tribune-Review to investigate it in detail. The result was Ruddy’s book The Strange Death of Vincent Foster, which exposed the failings of the official investigation into his death and the coverup.

In 1998, Ruddy started the Newsmax.com website, which grew rapidly and now generates revenues in excess of $50 million a year. MarketWatch.com’s media critic Jon Friedman claims that Ruddy has become a “bigger internet star than Rush Limbaugh” while Alexa.com ranks Ruddy’s website in the top 100 in the United States, and in the top 400 worldwide.

Highly critical of the Clinton administration, at least in the early years, Ruddy told the New York Times in 2007 that he and his financial angel and partner, Scaife, had changed their minds: “Both of us have had a rethinking. Clinton wasn’t such a bad president [after all]. In fact, he was a pretty good president in a lot of ways, and Dick [Scaife] feels that way today.” Later that year Ruddy published a positive interview with the former President at Newsmax.com and followed it up with a positive cover story in Ruddy’s magazine, Newsmax. A year later Clinton stopped in at Ruddy’s office for lunch and Ruddy recalls: “We had a great time with him. We consider Bill Clinton a friend and he considers us friends.” Forbes magazine noted in 2009: “Talk about strange bedfellows—Ruddy, Scaife and Clinton have become occasional lunch chums.”

With funding and friends on the Left, it isn’t surprising that Ruddy would select establishment media types to help out with the Iowa debate. The executive producer Eason Jordan boasts on his website that he worked closely with Ted Turner during the founding years of CNN. As well, Jordan vaunts his membership in the uber-insider group the Council on Foreign Relations, which promotes the idea that nations give up sovereignty to a world government.

Larry Register is the media coordinator for the event. He also boasts many years at Turner’s CNN as vice president for special projects.

Earl Maple is a director for the debate. He also served Turner for 23 years as his senior director in charge of political debates, political conventions, and election-night coverage.

CNN is now owned by Time-Warner, the ultimate media conglomerate, whose chairman, Jeffrey Bewkes, unsurprisingly is also a member of the Council on Foreign Relations.

It’s clear that Ruddy learned his lessons early about “how the media can manipulate facts and narratives to create a revised history both believable and untrue,” and is so far successfully applying them to his Newsmax creation, offering it as a “conservative” alternative to the mainstream media and drawing millions of readers to his website. No doubt viewers of the Iowa debate are also intended to conclude that Newsmax represents honest conservative values and points of view—brought to them courtesy of members of the mainstream media and the Council on Foreign Relations.

2012 Elections Banking Bill Clinton Conservative Council on Foreign Relations Democrat Donald Trump Elite Establishment Hillary Clinton Internet Liberal Mainstream Media Media Bias PBS Republican Sovereignty
This entry was posted on Thursday, December 8th, 2011 at 11:54 am and is filed under Politics. You can follow any responses to this entry through the RSS 2.0 feed. Both comments and pings are currently closed.
Many of the articles on Light from the Right first appeared on either The New American or the McAlvany Intelligence Advisor.