Closing the Gold Window: Remembering the Nixon Lie 40 Years Ago

Against the backdrop of price inflation reaching six percent, the unemployment rate touching five percent, the increasingly large holdings by foreign governments of dollars (that at the time were convertible into gold upon demand) and his desperate need to get reelected, in August, 1971 President Nixon conferred with his economic advisers about how to solve the inflation problem without taking any blame for it.

The meeting was precipitated by the demand from the British ambassador “who showed up at the Treasury Department to request that $3 billion [of paper dollars] be converted into gold. At that moment in time, the amount of “cover”—the amount of gold held in Fort Knox as a percentage of outstanding paper dollar claims against it—had declined from 55% to 22%—leaving the Treasury desperately close to default. The economic advisers surrounding Nixon knew that “shutting the gold window would weaken the dollar against other currencies, thus adding to inflation by driving up the price of imported goods,” but they moved ahead anyway. And so was born the Nixon lie, delivered just as the Asian markets were opening on Sunday night, August 15, 1971. Here are the relevant parts of the lie:

The third indispensable element in building the new prosperity is closely related to creating jobs and halting inflation. We must protect the position of the American dollar as a pillar of monetary stability around the world.

The only way to “halt” inflation is to stop increasing the money supply, which makes each dollar in existence worth less. To protect the dollar “as a pillar of monetary stability” the Treasury would have to cease selling government bonds that couldn’t be paid back with gold. The Treasury was the instigator, the enabler, the driver, the agent behind the inflation. But Nixon avoided any mention of the that. Instead, he blamed speculators:

In the past seven years, there has been an average of one international monetary crisis every year. Now who gains from these crises? Not the workingman; not the investor; not the real producers of wealth. The gainers are the international money speculators. Because they thrive on crises, they help to create them.

Who are these speculators? Nixon failed to say. How did they “create” the “crises?” He failed to say. What he did say was that he had to do something about them:

In recent weeks, the speculators have been waging an all-out war on the American dollar. The strength of a nation’s currency is based on the strength of that nation’s economy—and the American economy is by far the strongest in the world. Accordingly, I have directed the Secretary of the Treasury to take the action necessary to defend the dollar against the speculators.

Correction, please: the strength of a nation’s currency is based upon the promise that it will always at any time be redeemable for real money, which means gold. Those “speculators” were aware that the American government didn’t have the gold to back up their promise, and so were moving to redeem their paper dollar holdings as fast as they could before the window to Fort Knox closed. They were, in other words, acting in their own (or their various governments’) best interests. Who wanted to hold paper, especially in times of inflation? Who wanted to rely on politicians’ promises?  Paper can be inflated away to zero. Gold can’t.

And so here’s Nixon again, announcing his plan to defend the dollar:

I have directed Secretary Connally to suspend temporarily the convertibility of the American dollar except in amounts and conditions determined to be in the interest of monetary stability and in the best interests of the United States.

Here’s another piece of the Nixon lie: the “temporary” suspension continues today, 40 years to the day from his utterance. And notice please that Nixon was not looking out for the best interests of the American people, who were already suffering from price inflation (and who would continue to suffer even to the present day), but instead “in the best interests of the United States.”

At this point, Nixon played down to his audience of rubes and dopes:

Now, what is this action—which is very technical—what does it mean for you?

Let me lay to rest the bugaboo of what is called devaluation.

If you want to buy a foreign car or take a trip abroad, market conditions may cause your dollar to buy slightly less…

The effect of this action, in other words, will be to stabilize the dollar.

Nixon actually said this. Here is the link to his speech.

In essence, Nixon’s lie consisted of blaming “speculators” for their natural reaction to the increasing potential of being defrauded by the U.S. government—redeeming their paper for gold. The lie continued by suggesting that a weaker dollar is a stable dollar. The lie culminated in his arrogance in unilaterally moving to break that promise, with the consequences Americans are enjoying today. For once the link—tenuous though it was—was broken, any anchor the paper dollar had to real value was severed, unleashing a never-ending decline in the dollar’s purchasing power, and the resulting relentless and accelerating increase in prices.

For the first 175 years of the republic the price level remained relatively constant. But once the tie to gold was completely severed in 1971, the price level (as seen in the chart below) has increased six times in the past 40 years, with no expectation that such increases will cease. 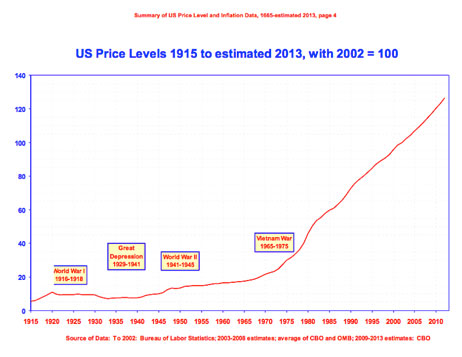 Constitutional Currency Economy Gold Standard Inflation Jobs Money Supply Unemployment War
This entry was posted on Saturday, August 20th, 2011 at 6:05 am and is filed under Economics, History. You can follow any responses to this entry through the RSS 2.0 feed. Both comments and pings are currently closed.
Many of the articles on Light from the Right first appeared on either The New American or the McAlvany Intelligence Advisor.