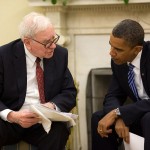 He began by suggesting that government leaders have called for “shared sacrifice” but that he didn’t get the call. “I checked with my mega-rich friends to learn what pain they were expecting. They, too, were left untouched.”

Unfortunately, facts are not only stubborn, they are different. In his editorial, Buffet notes that incomes of the top 400 taxpayers (many of them his friends) had grown from $16.9 billion in 1992 to $90.9 billion in 2008, but that their actual tax rate over that period had declined. What was missing, of course, was the fact that in 1992 those taxpayers’ income tax liabilities totalled $5 billion, but in 2008 it had almost quadrupled, to $19.5 billion. So while effective tax rates were going down on his rich friends, they wound up paying four times as much to the government. And that’s a bad thing?

To Buffet it is. He said,

I know well many of the mega-rich and, by and large, they are very decent people. They love America and appreciate the opportunity this country has given them. Many have joined the Giving Pledge, promising to give most of their wealth to philanthropy. Most wouldn’t mind being told to pay more in taxes as well, particularly when so many of their fellow citizens are truly suffering.

In that single paragraph the entire liberal ideology is in full view. His friends are good people. They are taking advantage of the opportunities the country is providing them, and becoming very rich. So rich, in fact, that many are giving their money away (tax-deductibly of course) rather than send it to Washington. But since they are such good people, they feel bad for those less well off, and wouldn’t mind the government coming in to redistribute their wealth, by force.

And just how did these nice folks become wealthy? By making intelligent decisions about providing products and services to others who are willing to pay for them. And the system that works so well? It’s the free-enterprise system that allows people not only to make investments, but to allow them to keep the rewards that come from making good ones. If these rewards are removed, the investments won’t be made. It’s as simple as that.

David Logan of the Tax Foundation weighed in on a number of Buffett’s assertions, making corrections along the way:

Mr. Buffet seems to forget that [taxes on] capital gains and dividends are a double tax on corporate income. Before it gives out a dollar in dividends, Berkshire Hathaway [Buffett’s company]—like all U.S. corporations—must first pay a 35 percent federal corporate income tax, one of the highest in the world.

Then, the shareholders pay the individual tax rate of 15 percent on their dividend income…. As a result, the combined tax rate of 50 percent is the 4th highest combined dividend rate in the industrialized world.

The main problem with raising taxes further on the super-wealthy is that there aren’t enough of them to make a difference in the deficit. As Logan points out, “Even if you doubled the taxes paid by every millionaire in America, you’d still make only a dent in the deficit. Millionaires and billionaires aren’t that plentiful. And that assumes they’d actually pay the higher rates.”

If Buffett were serious about closing the deficit, he would recommend to the Supercommittee that they reduce taxes substantially on the wealthy, rather than raise them. He would only need to look at history to see what happened when tax rates were significantly reduced. In 1921, the maximum tax rate was 73 percent on the highest income earners, and they paid 30 percent of the total taxes received by the government. By 1929, the maximum tax rate had been reduced to 24 percent, and those highest income taxpayers paid 65 percent of the total: Tax rates were reduced, revenues increased, end of story. Thomas Sowell quoted Secretary Andrew Mellon who noted the primary rule about capital and capitalists operating in the free market: “Just as labor cannot be forced to work against its will, so it can be taken for granted that capital will not work unless the return is worthwhile. [If it is not worthwhile, capital] will continue to retire into the shelter of tax-exempt bonds, which offer both security and immunity from the tax collector.” (Emphasis added.)

But by making returns on capital attractive by reducing the impact of taxes on gains, from 1921 to 1929 the government not only received more revenue, but unemployment dropped from 4.2 percent to 1.8 percent as well. Maybe this fact was overlooked by Buffett because he doesn’t actually produce anything. He is an investment advisor, not a manufacturer. A higher tax rate isn’t going to inhibit him from expansion, from risking money on new product lines, and from tackling new manufacturing fields—as it might an actual producer of goods.

In responding to Buffett’s recommendation that the Supercommittee raise taxes on himself and his friends, one of the members of that committee, Rep. Kevin Brady, saw through the errors and false assumptions in his letter and said, “This is not a serious solution for deficit control or getting the dismal economy on its feet. Economic growth does not follow a tax increase. So as much as I respect Mr. Buffett, his proposal fails on virtually every level.”

Buffett Rule Deficit Economy Federal Government Free Market Income Tax Liberal Supercommittee Taxes Unemployment Warren Buffett
This entry was posted on Wednesday, August 17th, 2011 at 5:47 am and is filed under Economics, Politics. You can follow any responses to this entry through the RSS 2.0 feed. Both comments and pings are currently closed.
Many of the articles on Light from the Right first appeared on either The New American or the McAlvany Intelligence Advisor.