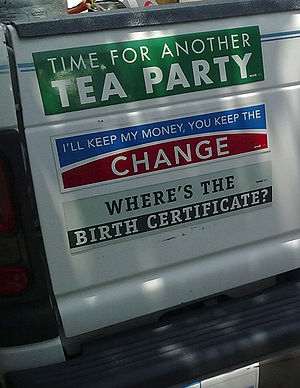 Dr. Jerome Corsi, author of Where’s the Birth Certificate?, which is about to be released by the publisher, noted the discrepancy right away. He said: “The long-form birth certificates issued by [the hospital] to the Nordyke twins have certificate numbers lower than the number given Obama, even though the president purportedly was born at the same hospital a day earlier than the Nordykes.” [Emphasis added.]

Bob Unruh, writing for WorldNetDaily, reviewed an analysis of the new White House birth certificate done for WND by Ivan Zatkovich of eComp Consultants of Tampa, Florida, which concluded that “there were anomalies inconsistent with a simple scanning process, and there is evidence that [the document] has been manipulated.” According to Zatkovich,

When a paper document is scanned on a scanner and saved as a PDF file it normally contains only a single layer of graphical information. The PDF that appears on the White House website contains multiple layers of graphic information. Multiple layers usually appear in a document like this when it is being edited or modified in some fashion.

This was confirmed by Albert Renshaw in a YouTube video he prepared that confirmed and expanded upon Zatkovich’s report. With close-ups of the PDF, Renshaw shows the several layers of graphics that exposed the various modifications made in the original document before it was put up on the White House website. One needn’t view the video—one need only print out the White House PDF file and look carefully at the mother’s occupation, and the mother’s signature block. The date in the lower right hand corner has also obviously been manipulated with careless use of different colored inks when the changes were made.

Before today, Obama may have attempted to explain away problems with the short-form Certification of Live Birth as the work of his supporters.

Before today, the president largely remained above the fray. Now, he has fully engaged in the presentation and defense of his birth records and his status as a “natural born citizen” under Article 2, Section 1 of the Constitution.

Obama’s presidency now depends upon the White House being able to support the veracity of all the information contained in the birth document.

According to the Random House Dictionary of the English Language, “genuine” is defined as “possessing the purported character, quality, or origin; not counterfeit; authentic; real.” The moment a person modified the original document, however slightly, it was no longer genuine. If the claims made by these experts are to be believed, then the White House, and the President himself, have much more explaining to do.

Constitutional Obama Obama Birth Certificate Video YouTube
This entry was posted on Tuesday, May 3rd, 2011 at 3:51 pm and is filed under Politics. You can follow any responses to this entry through the RSS 2.0 feed. Both comments and pings are currently closed.
Many of the articles on Light from the Right first appeared on either The New American or the McAlvany Intelligence Advisor.