Of all the explanations, statistics, projections, and conjecture about the Obama administration’s new budget, nothing has had the impact of this simple graph in showing the assumptions, misstatements, and downright falsehoods that are required to “make the numbers work.”

The source for this very telling graph is the Obama administration’s Office of Management in budget. Below is the graph, as it appears in the Wall Street Journal. 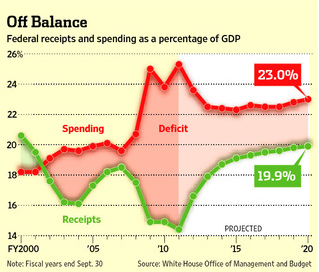 “If the projections are correct,” as the New York Times noted hopefully, “2012 will be the fourth and final year with a deficit over $1 trillion. [The] deficit for the next fiscal year is expected to be smaller by more than $500 billion.” And then spending is expected to remain fairly constant through 2020.  Even if the Obama dream were to come true, it is estimated that the national debt, currently pushing the ceiling at $14.2 trillion, would nearly double.

And even that estimate is bogus as it fails to count more than $10 trillion in other commitments or guarantees made by the government along with $2.6 trillion in “investments” such as GM and AIG.

Another assumption necessary to make this work is a strong economic rebound from now through 2020, a longer uninterrupted period of growth than the U.S. has ever experienced. Growth for 2011 is projected at 2.7 percent, for 2012 at 3.6 percent, and then 4.0 percent per year thereafter.

The recently enacted extension of the “Bush tax cuts” is expected to be repealed, resulting in an estimated $500 billion of new revenues, along with reinstatement of the Alternative Minimum Tax (AMT) which would capture an ever-widening number of middle-class taxpayers. Repeals of existing “tax breaks” for the oil and gas industry are also assumed, as well as the termination of itemized deductions for the “wealthy.” It’s also assumed that Medicare physicians will sit still for yet another haircut in their fees. And the modest reductions of government spending are projected years into the future, with no assurance that succeeding administrations will enforce them.

Other assumptions include that there will be a substantial reduction in the jobless rate, which would reduce government unemployment benefits, and that interest rates to finance the never-ending deficits will remain low. And of course, the debt ceiling will have been raised, probably several times, in order to allow the binge to continue.

And this assumes also that those funding the binge will continue to do so, that the recent warning by Moody’s that the country’s credit rating could be in jeopardy unless substantial efforts are made to rein in the government turns out to be nothing more than that: a warning.

And so one can see that if everything works perfectly, government spending will level off, revenues from a growing economy will increase dramatically, and the deficit will drop to a “manageable” level.

But what if things don’t work perfectly? What if the economy fails to rebound, providing jobs and fresh revenues to the government?  What if the Bush tax cuts are extended once again (i.e., the taxpayers are allowed to keep more of their money), and the onerous AMT is discarded once and for all. What if foreign investors such as China (currently holding $900 billion of the country’s debt) or Japan (currently holding $877 billion) decide to stop purchasing new debt? Preliminary signs are appearing that China is already reducing its inventory of U.S. debt, and its current “bubble” economy is beginning to show weakness. As Japan’s own population ages, more and more demands will be made on its own capital reserves, turning them into net sellers of U.S. debt.

And Social Security faces increased demands to turn its IOUs into cash for retiring beneficiaries, which puts additional spending pressure on the government.

What if interest rates begin to rise, reflecting either a slow economic recovery or a perceived higher default risk, or both? With almost half of the debt of the United States being rolled over every year, a small increase in interest rates would blow all of Obama’s projections into the ether.

The real world, as opposed to that envisioned by the happy faces of the Obama administration, is very likely to be vastly different from what was originally assumed. It will be then that the sleight of hand hiding reality will be fully revealed.

2012 Elections Auto Industry Bush Tax Cuts China Debt Ceiling Deficit Economy Entitlements George W. Bush Health Care Interest Rates Jobs Medicare National Debt Obama Social Security Spending Taxes Unemployment Wall Street
This entry was posted on Wednesday, February 16th, 2011 at 3:48 pm and is filed under Economics, Politics. You can follow any responses to this entry through the RSS 2.0 feed. Both comments and pings are currently closed.
Many of the articles on Light from the Right first appeared on either The New American or the McAlvany Intelligence Advisor.