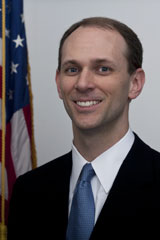 Few were surprised when President Obama replaced Christina Romer, chair of his Council of Economic Advisers, with another statist economist, Austan Goolsbee. Goolsbee is the architect of Obama’s failed economic policies and programs, having served as the executive director of the President’s Economic Recovery Advisory Board from the beginning.

A bright student at Yale where he enjoyed membership in the exclusive and elitist Skull and Bones secret society, Goolsbee went on to get his PhD from MIT, and then immediately became a professor at the University of Chicago. With stints at the American Bar Association and the National Bureau of Economic Research, he was named to Obama’s Council of Economic Advisers in March, 2009.

The Wall Street Journal calls him “a liberal economist at the conservative Chicago school,” who helped draft Obama’s “New Foundation” economic program to expand healthcare, provide more money for education, promote strategies that are “supposed to produce new jobs for manufacturing and construction,” and increase efforts to promote more stability in the financial markets.” Goolsbee, said the Journal, “doesn’t represent any kind of break…[and] the elevation of Mr. Goolsbee is a signal that the president isn’t about to change course.”

The Washington Post’s blogsite WhoRunsGov.com claims that “Goolsbee believes in free markets, small government and lower taxes, but not necessarily for the rich.” But his opposition to profits that can only be generated by a free market was made clear when he spoke of his great admiration for the potential of the Internet. He said “The internet is the great equalizer, [and] it is going to make markets close to perfectly competitive, [but] there shouldn’t be any profits [in it].” (Emphasis added.) Such a point of view isn’t surprising considering that Goolsbee has had zero experience in the real world of real business, knowing only what he knows from reading books.

In July, 2009, the New York Times sponsored a Q and A session through its Freakonomics blog with bloggers asking Goolsbee some tough questions. His answers confirmed his position as a statist economist, even though he adamantly denied such a label at the outset:

Q: Why do you and the president believe that centralized control of the economy will be productive? – DaveyNC

A: Whoa, Davey. The president and the administration firmly believe in the importance of a well-functioning private sector…We are not “tightening our control” of these industries in order to convert them to centralized socialism…You are not going to find anybody more opposed to socialism or corporate welfare than me [sic].”

Q: Do you think raising taxes on the wealthiest taxpayers can stifle economic growth? Why or why not? – CL

A: In Obama’s budget specifically, the top rates would go back to where they were in the 1990’s (when growth was quite respectable); it would invest in education and the health system and cut taxes for 95 per cent of workers in the country. I don’t see that stifling growth at all.

A: The skills and education of our people and technological innovation. Those are the key investments we can’t forget about…[but] I don’t know what [those] industries of the future will be, though.”

Q: What cultural-change initiatives might we create to give Americans more confidence in their individual futures? – EPM

A: A three-part policy to help this might include 1) strengthening the incentives for savings…[by enforcing] enrollment programs for people prone to save little; 2) a macro-economic policy that invests in getting the incomes of ordinary Americans growing again; and 3) implementing sensible credit card…reform [so that Americans] are better able to make credit decisions.”

And the best question of all, with Goolsbee’s best equivocation of all:

Q: What is the real rate of unemployment? – KS

A: I don’t think it changed specifically under Bush, but you raise an important point. There are a lot of people out of the labor force including, for example, a huge increase in the number of people on disability who, according to researchers, would have been part of the unemployed in the old days. There are also more people now counted as employed who are involuntarily part-time workers or “under”-employed workers, so we need to be careful making apples-to-apples comparisons across decades in the unemployment rate. It’s hard to compute the exact number because some of these data did not exist in older decades. It’s sort of like trying to compare batting averages now to the 1960’s when the pitcher’s mound was higher. You just have to be aware of the differences.

Deroy Murdock, a media fellow with Stanford University’s Hoover Institution, strongly disputed the success of the Obama stimulus programs by stating that “the parade of stimuli that President George W. Bush launched and the stimulator-in-chief has accelerated has left Americans impoverished, indebted and increasingly jobless…Unemployment somehow has risen from 7.4 per cent when Mr. Obama was sworn in to 9.6 per cent today.” After reviewing all the attempts promoted by Goolsbee and passed by Obama, Murdock asks “What has this brought us? Auto and home sales collapsed when these temporary rebates and credits expired. Meanwhile, gross domestic product growth has sputtered to 1.6 per cent…Credit has evaporated…In terms of lending, Bloomberg News describes this as ‘the deepest contraction in more than 35 years.’”

With Goolsbee in the driver’s seat, can Americans expect any change in direction? Not likely. Goolsbee, instead, could learn why such stimuli and interventions never work by reading from Thomas Jefferson:

To take from one, because it is thought his own industry and that of his fathers has acquired too much, in order to [give] to others, who, or whose fathers, have not exercised equal industry and skill, is to violate arbitrarily the first principle of association, the guarantee to everyone the free exercise of his industry and the fruits acquired by it.

Conservative Economy Education Elite Establishment Free Market GDP George W. Bush Internet Jobs Liberal Obama Private Sector Socialism Stimulus Bill Taxes Unemployment Wall Street
This entry was posted on Wednesday, September 15th, 2010 at 11:35 am and is filed under Economics, Politics. You can follow any responses to this entry through the RSS 2.0 feed. Both comments and pings are currently closed.
Many of the articles on Light from the Right first appeared on either The New American or the McAlvany Intelligence Advisor.