Fed Chairman Ben Bernanke has described the new “term deposit facility” as “roughly analogous to the certificates of deposit that banks offer to their customers.”’ Although the new tool “has no implications for monetary policy decisions in the near term,” he admits that

The Federal Reserve has addressed the financial market turmoil of the past two years in part by greatly expanding its balance sheet and by supplying an unprecedented volume of reserves to the banking system. Term deposits could be part of the Federal Reserve’s tool kit to drain reserves, if necessary, and thus support the implementation of monetary policy.

There are other tools available to the Fed to remove liquidity from the economy, such as Open Market Committee operations, raising reserve ratios, and using reverse repurchase agreements. However, all of this begs the Big Question: When is the general level of prices going to start moving higher?

According to Reuters, “The amount of money sloshing around has fueled concern about the possibility of high inflation [price increases]. Withdrawing reserves at just the right time is seen as crucial to keeping consumer prices under wraps.”

Raymond Remy, head of fixed income securities at Daiwa Securities was more direct: “They [the Fed] have a big problem with excess reserves and this is one of the ways to deal with it.”

Two charts available from the Federal Reserve Bank of St. Louis illustrate the enormous rise in money supply (known as M1, below left) over the past year, as well as the “velocity” of money, known as the M1 Multiplier (below, right). 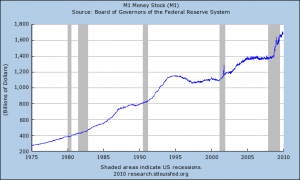 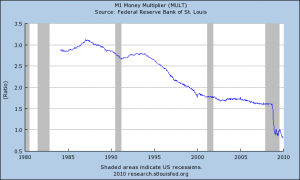 The decline in the velocity of money has essentially completely offset the growth in the money supply, reflecting consumers’ uncertainty about the economy, employment, and government intervention in the economy.

If history is any guide, however, the consumer will soon see that price increases are inevitable, and will begin to spend their paper money before it loses more value. Harry Figgie and Gerald Swanson, in their book Bankruptcy 1995 did readers a service by illustrating graphically the behavior of prices in Bolivia, Argentina, and Brazil in the early 1980s. In each case, prices were relatively stable for a period of one to three years before taking off and reaching truly astronomical heights.

The situation in Zimbabwe illustrates what happens as hyperinflation destroys the currency. There was a period of relative price stability lasting several years before the final blowoff. The Zimbabwean dollar was finally declared to be worthless in April.

This period of relative price stability has allowed the Fed some breathing room and to create new tools to “fight inflation” in the future. According to Reuters, “At the height of last year’s financial meltdown, the Fed had been discussing going to Congress to request the authority to issue its own bills. The term deposit facility achieves a similar purpose, but can be undertaken within the Fed’s existing authority and does not require congressional approval [emphasis added].”

As Tom Simons, an economist at Jeffries, put it, “This is more of a politically acceptable way of getting the same thing done.”

Marc Faber, editor of the Gloom Boom & Doom Report, was asked about the coming rise in price levels as a result of the Fed’s aggressive policies, and what impact that might have on the stock market.

Ultimately, the Standard & Poor’s Index could rise 200% if the Fed prints enough money.  I suppose this will happen over the next 10 years or so.  Eventually, the U.S. government will have no other option but to print massively to finance the growing fiscal deficit.

History may not have to repeat itself, especially as awareness of the Fed grows along with increasing resistance to its policies. According to U.S. Rep. Ron Paul, the author of a bill to audit the Fed and a book entitled End the Fed: “Whatever happens, the Fed and its defenders have seen that people are becoming very wary of its methods of operation, and many are downright angry at its very existence. Never again will the Fed be immune from the scrutiny of its critics. This is very positive.”

Banking Bankruptcy Ben Bernanke Central Bank Currency Deficit Economy Federal Reserve Fiat Currency Inflation Interest Rates Monetary Policy Money Supply Paper Money Retirement Ron Paul
This entry was posted on Monday, January 4th, 2010 at 4:14 pm and is filed under Economics. You can follow any responses to this entry through the RSS 2.0 feed. Both comments and pings are currently closed.
Many of the articles on Light from the Right first appeared on either The New American or the McAlvany Intelligence Advisor.