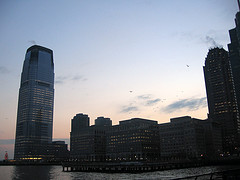 As a way to protect long positions that Goldman had taken when the housing market was in full flower, its management developed some hedging strategies in case their bets were wrong. Directly involved was Jonathan Egol, a brilliant young graduate of Princeton who saw the coming collapse long before nearly anyone else. Developing investment packages for Goldman to offer to its highly sophisticated investors such as insurance companies, pension funds, charitable foundations, and hedge funds, Egol built them around mortgages secured by commercial and residential properties.

With remarkable foresight, Egol realized the potential risks that Goldman was taking if the housing market were to decline. Consequently, in December 2006 Goldman changed its stance on the housing market from positive to negative, but did not disclose the change publicly.

Goldman, however, continued to market these packages to investors hungry for the returns they had been generating over the past several years. Goldman went on to develop packages that didn’t actually contain real mortgages, but instead consisted of credit-default swaps, a type of insurance policy that would pay if a borrower defaults. By using leverage, these swaps allowed investors to take much larger positions with their existing capital. The leverage often exceeded six or seven times the face value of the CDO package.

At the top of the real estate market, the value of these exotic packages exceeded 45 trillion dollars.

Leverage was further expanded through the use of derivatives so that, at the end of 2008, the Bank for International Settlements in Switzerland estimated the face value of all derivative contracts across the world to be 680 trillion dollars.

According to the New York Times,

Derivatives are hard to value. They are virtually hidden from investors, analysts and regulators, even though they are one of Wall Street‘s biggest profit engines.

In 2005 Egol and Goldman saw an opportunity not only to hedge its own long positions, but also to take short positions in hopes of generating additional profits in the event of the decline they saw coming in the market.

And that is where, according to some, they crossed the line. And that’s why the SEC is investigating Goldman. It’s one thing to offer a product to a customer.  It’s another thing entirely to take a position against those customers without disclosure.

Goldman defends itself by claiming that 1) they did disclose the possibility they might take a contrary position to that of their customers, and 2) they were dealing with sophisticated investors who should have known what they were doing.

Although the investigation is in its early stages, inside sources say that the SEC is trying to determine whether securities laws or rules of self-dealing were violated by [firms like Goldman and others] that created and sold these mortgage-linked debt instruments and then bet against the clients who purchased them.

According to Sylvain Raynes of R & R Consulting in New York and an expert in structured finance:

The simultaneous selling of securities to customers and shorting them because they believed they were going to default is the most cynical use of credit information that I have ever seen. When you buy protection against an event that you have a hand in causing, you are buying fire insurance on someone else’s house and then committing arson. The profit potential in going against their customers was enormous. One particular package, Hudson Mezzanine, was an $800 million CDO. The investors would make money if the housing market stayed strong; they would lose if it didn’t. Goldman made financial bets against the securities in that CDO so that it would profit if they failed, which they did.

One of Goldman’s salesmen said, “Here we are selling this, but we think the market is going the other way.”

Within 18 months, so many of the borrowers had defaulted that investors in Hudson were forced to pay out $130 million to Goldman who had bet against it.

A Goldman spokesman said that such bets against the housing market didn’t keep it from suffering losses on its mortgage assets, but former Goldman representatives say that Goldman’s short positions will be far more lucrative over time. The article noted:

As revealing as this is, there is further investigation of whether [Goldman] purposely helped to select especially risky mortgage-linked assets that would be the most likely to crater, setting their clients up to lose billions of dollars.

As one reader commented on the Times article: “This accusation goes far beyond betting ‘betting against your clients.’ This is an accusation of deliberate sabotage, then betting on the outcome.  It isn’t like a doctor taking out life insurance on a patient.  It is like a hit man taking out insurance on [his] target. If the investigation successfully proves the allegations, it will confirm what many believe is “business as usual” standards of conduct for Goldman.

And, as noted by Jon Pesch: “These were the investments that cost investors dearly and pushed the government to use billions of our tax dollars to stabilize the banking system.”

Banking Goldman Sachs Housing Market Insurance Mortgage Crisis Pension Real Estate SEC Taxes
This entry was posted on Monday, December 28th, 2009 at 8:35 am and is filed under Economics. You can follow any responses to this entry through the RSS 2.0 feed. Both comments and pings are currently closed.
Many of the articles on Light from the Right first appeared on either The New American or the McAlvany Intelligence Advisor.