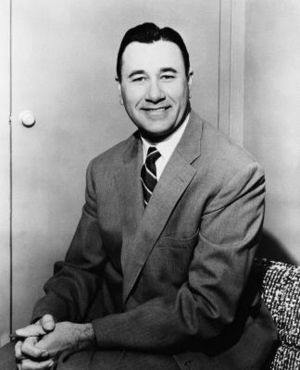 For nearly 15 years he served as a pastor in towns in Oklahoma and Texas while studying at Oklahoma Baptist College. At that point, Roberts said, he heard God speak to him again, urging him to “be like Jesus and heal people as he did.”  So Roberts rented a hall in Enid, Oklahoma, where he held his first healing service.  One thousand people attended, which inspired Roberts to move to Tulsa and start the Oral Roberts Evangelistic Association.

Roberts later said that God had told him to “put Jesus into my focus at the center of all my thoughts, my dreams, my plans, my accomplishments, my destiny and any legacy I might leave behind.”

His healing ministry continued to grow until 1963 when he founded Oral Roberts University. The university (ORU) and his evangelistic association reached its peak in 1985 when they employed more than 2,300 people with annual revenues of over $110 million.

Roberts’ ministry was built around his personal energy and magnetism, his fiery preaching, his natural talent as a showman, and television. With this combination, Roberts became the first national spokesman for Pentecostal theology and evangelism.

In 1978 he began raising funds to build the City of Faith medical center, the first hospital to offer both healing arts medicine and spiritual healing together. Although the center was closed in 1989, Roberts said it left “a lasting impact on the understanding by many medical professionals of the importance of treating the whole person — body, mind and spirit.”  Harvard University theologian Harvey Cox expressed a similar view: “[Before Roberts] the idea of healing within a religious service was left to Christian Scientists or people who went to Lourdes.  Now, it’s fairly common in churches across the board. In his own way, [Roberts] made that happen.”

The reach and impact of Roberts’ ministry can partly be measured by numbers:

Worldwide, the charismatic branch of Christianity grew from an estimated 20 million to 600 million during his ministry.

Today, the ministry’s daily program, The Place for Miracles, is seen on more than 100 television stations, multiple cable and satellite networks, and the internet.

Vinson Synan of Regent University (and an historian of the Pentecostal movement) ranks Roberts among the three or four most important Christian leaders of the last half of the 20th century. Synan went on to say that Roberts was widely loved for bringing Pentecostals, derided as “holy rollers” (for their spirit-filled worship and speaking in tongues) into the mainstream: “More than any other person, [Roberts] should be credited with starting the charismatic movement in mainline religion. He brought divine healing into the American consciousness.”

But his impact statistically is dwarfed by his impact on his fellow evangelical preachers, such as Jack Hayford, president of the California-based International Church of the Foursquare Gospel, who said, “Oral shook the landscape with the inescapable reality and practicality of Jesus’ whole ministry. His teaching and concepts were foundational to the renewal that swept through the whole church.”

Billy Graham said, “Just three weeks ago, I was privileged to talk to Oral on the telephone. During our short conversation, he said to me that he was near the end of his life’s journey. I look forward to the day that I will see Oral and Evelyn Roberts again in heaven — our eternal home.” Graham said that Oral “was a man of God, and a great friend in ministry. I loved him as a brother.” Graham dedicated ORU in its grand opening ceremony in 1967.

Dennis Lindsay, president of Christ for the Nations, said, “I have always admired Brother Roberts for his strong faith and believing in the supernatural gifting of healing and deliverance for the body of Christ.”

Roberts’ impact on his students was equally powerful, influencing many to get involved in politics and public policy. For example, David Barton, founder and president of WallBuilders, said:  “He did advocate having good folks, people of faith [getting involved] in the civil arena, as well as in medicine and everything else.” Other alumni include Ken Copeland and Republican U.S. Representative Michelle Bachmann of Minnesota.

2012 Elections Christian Education Energy House of Representatives Internet Michele Bachmann Religion Republican
This entry was posted on Thursday, December 17th, 2009 at 11:41 am and is filed under History, Religion. You can follow any responses to this entry through the RSS 2.0 feed. Both comments and pings are currently closed.
Many of the articles on Light from the Right first appeared on either The New American or the McAlvany Intelligence Advisor.